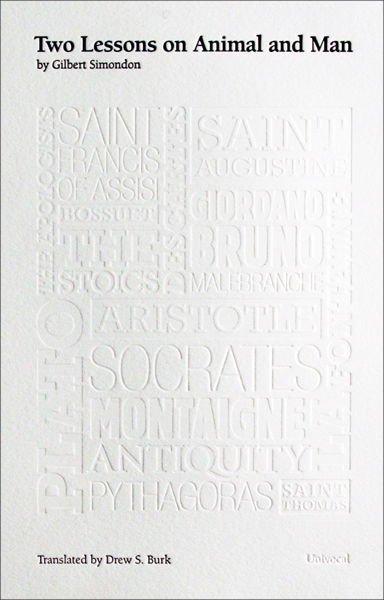 It is my great delight to help announce the publication of one of the first book-length English translations available of the writings of French philosopher of technology Gilbert Simondon (1924-1989), published by Univocal. The volume is available under the title Two Lessons on Animal and Man and was translated by Drew Burk. The work is composed of a series of lectures intended for undergraduates interested in the humanities, especially philosophy, sociology and psychology.

As the translator puts it, “[f]or many, Gilbert Simondon is an unheard of landscape of philosophical inquiry. For other thinkers such as Gilles Deleuze and Bernard Stiegler his work on individuation is essential for the task of moving outside anthropocentric conceptions of identity formation and humanity’s relationship to the technical universe.” (Two Lessons on Animal and Man, Translator’s Note) I might merely add that in this text Simondon offers insights that are of vital urgency and interest, especially to those called by this aptly-designated “task.”

There is a very good introduction by Jean-Yves Chateau that is quite helpful in developing the themes, introducing the chief concerns and setting the stage for the questions ahead. In particular Chateau very clearly identifies and elaborates the critical problematic that the relationship between animals and human beings poses for any general psychology. Chateau also provides some helpful context in terms of Simondon’s larger project, considering a question that Simondon poses in his major philosophical work, L’Individu et sa genese physico-biologique 151: “how do the psychical and the vital distinguish themselves from one another?” while making it clear that the distinctions here are not identical to those between animals and men. Chateau closes the introduction by reminding us that “we cannot say in advance what the capability of a being is, as soon as we are dealing with a living being” (Two Lessons…, “Introduction” by Jean-Yves Chateau, p.27), a point that bears repeating in and of itself; though we should here remember the special importance of Simondon in Deleuze’s philosophy.

Much of the main body of the work is involved with carefully tracing the major history of conceptions of the relationship between animals and human beings. In doing so he uncovers and elaborates some perhaps surprising aspects of this problem. He begins the first lesson by taking us back to antiquity and the ancient idea (which he notes is in a sense “pre-philosophical”, present in myths before theories) of a metempsychotic community of souls continuously transmigrating between humans and animals. For many ancients thinkers, he shows, there was a common vital and spiritual component shared by animals and plants; the soul was no different in quality in non-human animals than in a human being. Between animal and man there is no gap or break in continuity.

Simondon says this idea of a basic spiritual continuity of all living things is what “really surprises” historians of thought when they look back at the philosophy of antiquity, and unpacks here what might be understood as a doctrine of the “pre-individuality” of the soul; through transmigration a soul “individualizes” itself, but has the opportunity for another existence after death through “de-individualizing” and migrating again. He makes the interesting claim that the idea of metamorphosis — fables in which crying women become trees or even rivers… — have their ultimate basis in these ancient beliefs in the transmigration of the soul.

To give a sense of the scope of Two Lessons on Animal and Man, permit me to sketch Simondon’s trajectory. The first lesson begins with ancient Greek philosophy with respect to the problem of the relationship between animals and men. Simondon discusses the philosophy of Pythagoras and Anaxagoras, and then devotes a good deal of time talking about Socrates and Plato. He finishes the first lesson by discussing the Stoics,  drawing a basic distinction between “naturalist” and “ethical” theories about the relationship between animals and men. The second lesson opens with a discussion of the Apologists and then Saint Augustine and Saint Thomas. Simondon then turns to Giordano Bruno and Saint Francis of Assisi, followed by Montaigne and Descartes, to whom he devotes a good deal of care. The discussion begins winding down with brief readings of Malebranche’s and Bossuet’s positions on the question. Finally, we are treated to a beautiful discussion of the critiques of Cartesian metaphysics embedded in several of La Fontaine’s fables, including The Two Rats, The Fox and The Egg. While definitely something of a whirlwind tour, Two Lessons offers us an extraordinary number of sharp insights into the problem it sets out for itself.

I would highly recommend this text for anyone wishing to get more acquainted with Simondon’s insights and theoretical contributions to philosophy. The translation is a landmark in terms of Simondon coming to our shores, and hopefully indicates that more of his important work will be coming soon in English.