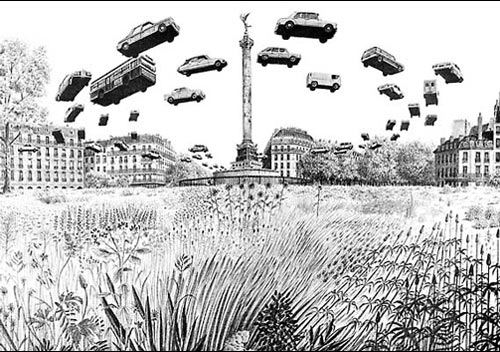 “When I’m dreaming back like that I begins to see we’re only all telescopes.”

Dream-analysis does not necessitate an affirmation of the existence of universal structures of expression; it need not amount to the tiresome interpretation of the same hidden message over and over again, wherein the forms of thinking and speaking and finally reality itself are rendered identical, cruelly reduced to a single and all-encompassing formula. It suffices to mention that the good doctor Freud would have us believe the dream-work is essentially uncreative, that it amounts in the end to an organic process of coding, one of unsteady translation between the sleeping consciousness and the passive unconscious, producing a kind of dense hieroglyphic writing which must then be interpreted through an analytic exchange.

The dream understood as writing (even schizowriting) becomes poisoned; the dream taken as representation leaves us only with a kind of mindless condensation and confusion of many distinct memories. Even so, the messages are too free; Freud always seems to lose sight here, missing the material process of decoding unfolding before his eyes. We miss the dream-work entirely, we find only translation instead of production. Freud is neither the last nor first scientist to seek relentlessly to crush singularity in favor the universal — a strange moment where it seems reason itself has gone mad, engaging itself in an infinite and searching analysis “beneath” for some powerful and profoundly-hidden writing. It is this desire for some universal “meaning” disseminating itself through the dream in a distorted form which necessitates the uncreativity, the non-productive character Freud ascribes of the dreamwork. And thus the dream has already frozen, and becomes a little analysis in itself.

The interminability of the analysis corresponds precisely with this frozen process, this hideous arresting of the infinite circulation of the dream. It is only possible to open psychoanalysis to the outside by arresting its own process of continuous interpretation: “No longer are there acts to explain, dreams or phantasies to interpret, childhood memories to recall, words to make signify; there are colors and sounds, becomings and intensities… There is no longer a Self that feels, acts and recalls; there is a ‘glowing fog, a dark yellow mist’ that has affects and experiences movements, speeds.” (ATP 180) It is clear enough a non-productive unconscious could not produce a cure; such an unconscious could only accept one imposed from without, a cure intended to code and crush desire — to normalize our unconscious, not to assist its process of production.