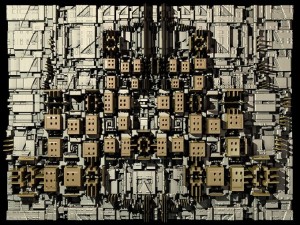 In the disparity between the awareness of unreason and the awareness of madness, we have, at the end of the eighteenth century, the point of departure for a decisive movement: that by which the experience of unreason will continue, with Holderlin, Nerval, and Nietzsche, to proceed ever deeper towards the roots of time — unreason thus becoming, par excellence, the world’s contratempo — and the knowledge of madness seeking on the contrary to situate it ever more precisely within the development of nature and history. It is after this period that the time of unreason and the time of madness receive two opposing vectors: one being unconditioned returned and absolute submersion; the other, on the contrary, developing according to the chronicle of a history.

If there is something in literature which does not allow itself to be reduced to the voice, to epos or to poetry, one cannot recapture it except by rigorously isolating the bond that links the play of form to the substance of graphic expression.

There is no antagonism here between a true world and an apparent one: there is only one world, and that world is false, cruel, contradictory, misleading and seductive, deprived of meaning… such a world is the true world. We need deceit in order to conquer this reality or “truth,” that is, in order to live. The fact that deceit is necessary in order to live still has to with the terrible and problematic nature of existence… This faculty by which he rapes reality with deceit, this essentially artistic faculty in man, is something he has in common with everything that exists…

How do we situate the metaphysics of language? The stratification and fragmentation of the signal goes so far beyond the empirical consciousness bound to its immediacy that the difficulty of the project is comparable only to its necessity. The original direction or deflection of the word, the passing-over of the word into image, and the collapse of meaning, follow a schema with which we are familiar. It is precisely here that it is most important not to interpret directly.

The point is not about suffering, but determination. Knowledge begins in delirium. The universe begins with a conjunction, an operator of connection. Everything moving is already a machine, plugged into a world of celerities, issuing regular pulses, gradually transforming itself and its surroundings. Thus the degree of transformation is also the degree of risk to the hidden operators. “ Oh, the poor bird that felt free and now strikes the walls of this cage! Woe, when you feel homesick for the land as if it had offered more freedom — and there is no longer any land.” (Nietzsche, The Gay Science) The problem is not only that names are caught up in ascending and descending chains, an infinite series of minimal differences; the problem never was identifying the limit, and at any rate, this is precisely where our organs overtake us. Creativity is nothing more than acceleration. Have we forgotten so quickly?

Our real problem can be provisionally summarized as follows. How to situate language itself in terms of metaphysics? A phase-map is not enough. The origin of language is indiscernible from a continuous transformation, not a signal but a teaching-learning that the Greeks had innocently called mathemata. A mark and not a symbol, a map and not a trace. Saturated, simple, deep. For the unforeseen origin of the code occurs precisely on the boundary of the unacknowledgable, the imperceptible rupture at the heart of every science. The parasite thus invents learning as well: it all begins with a difference in intensity, a tiny divergence accelerating into a raging vortex. Learning is becoming imperceptible. We are therefore with Artaud, when he writes of becoming-unspecified: “The soul could be reborn; however, it is not reborn. For although eased somewhat, it feels it is still dreaming, it hasn’t yet transformed itself into that dream with which it cannot yet fully be identified.” (from “Who, in the heart…”)

Expression is not a house, but houses are a collection of languages, a tightly-coupled network of machines, a mixed and integrated dynamism. Life hides, suffused, within life. There are only clusters of folded singularities, sub- and super-organisms. We are each a field of membranes, a bewitched line of free transformation; and in the middle there are only pure intensities. “There it is, the spasm, with heaven concurring, towards which a spiritual coalition unfurls, AND IT COMES FROM ME.” (Artaud, “Transparent Abelard”) A silent explosion: we had expected there to be the erased echo of an ellipsis. We discover positivity itself. Why did we try to construct a false memory for this moment — ignoring the trauma of the other, producing only some forgotten miracle or some terrifying mystery — some razor-sharp coast-line protecting us, penetrating us from every orifice?

But in the middle, in the warmth of hospitality, there are no judgments. The heater is buzzing — and every machine will already have been a machine of machines — and heat is another operator, the organizer of organisms, it does not matter and we cannot tell anyway whether it is a series of deliberate judgments or a whim. Expression is not exhausted in counting, but only in becoming non-expression. An augmented fifth The first, the very first distinction is metaphysical: intuition from instinct. This is why language is like justice, because it overflows itself, opening onto a formless and pure infinity. We attend to the future only by placing ourselves into variation, by following flows of forces, by playing the variant. The third inversion. An imperceptible shift. Allegro. The improvisation is not an echo chamber, but a tiny parasite, itself well protected from the spasmodic reverberations — the operator of transformation itself. Lento. The parasite risks itself in proportion to the intensity of the transformation. Another dimension intrudes, as though from everywhere, a new parasite chases out the old, and upon this unholy procession itself, a metrical rhythm is imposed. A holy covenant: what happened?

Is it a pure differential, an eloquent divergence, or a line of abolition issuing from deep affirmation? Or something else entirely — a new kind of discourse bursting free, turning escape routes into lines of flight? Expression is the unfolding of this mystery. A machine which produces breaks in other machines, a parasite infesting every open hold. The light is, perhaps, too bright — but at least there are no longer any shadows.

No harsh outlines, only glare.

A pummeled landscape. Pulsations, ruptures, a whole series of war machines erupt along lines of free potential. The question is about refreshing desire in the midst of the formal structure of general parasitism. Healthy organs are silent, docile. Behind an old metaphysic, we rediscover an even older politics. “Who has the most convincing eloquence so far? The drum roll; and as long as the kings command that, they remain the best orators and rabble rousers.” (The Gay Science 175) Codes are hymns, the original tool of power, and they work, there is no question about that. Their value is repaid many times over, even if an infinite debt thereby incurred. But it would be naive to praise or blame the coding processes as such, to attach a moral value to this debt or this surplus value as such. We do not blame a whirlwind for twirling, or a computer for following its program, or a predator for eating its prey. A scientific study of language must begin by mapping the real economic and political units generating the plane of consistency upon which language is itself but a single dimension. Our criteria must be immanent to the scale, to the phase, to the transition.

At first, we think we must learn compassion for our parasites; but then we realize that the parasite has discovered peace, he has already invented the word of reason, the dialogue which transforms the enemy into an ally. Or, as Serres writes in The Parasite: “There is no war.”

Arguing that “the masses are not yet ready” reminds us not of the RAF and captured revolutionaries in isolation, in special prison sections, in artificial brainwash collectives, and in prison, only of the arguments of the colonial pigs in Africa and Asia for over 70 years. Black people, illiterates, slaves, the colonized, tortured, suppressed, starving, the peoples suffering under colonialism, were not yet ready to take their bureaucracy, their school system, their future as human beings into their own hands. This is the argument of folks who are worried about their own positions of power, aiming at ruling a people, not at emancipation and liberation struggle.