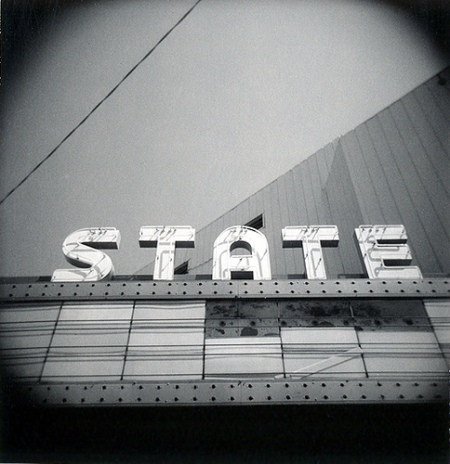 But certainly for the present age, which prefers the sign to the thing signified, the copy to the original, representation to reality, the appearance to the essence…illusion only is sacred, truth profane. Nay, sacredness is held to be enhanced in proportion as truth decreases and illusion increases, so that the highest degree of illusion comes to be the highest degree of sacredness.
–Feuerbach, Preface to the second edition of The Essence of Christianity

Feuerbach—copy/original—simulacrum—Deleuze and Baudrillard?
Accumulation of spectacles—”All that once was directly lived has become mere representation” (12).
Detached images enter into a common stream—partial aspects of reality congeal into a pseudo-world set apart as object of contemplation/autonomous image where deceit deceives itself–autonomous movement of non-life.
Three aspects of the spectacle—society itself/parts of society/means of unification. This is the place of false consciousness because it is where all consciousness converges–it is merely the official language of generalized separation

[For the convergence of Badiou, Deleuze, Guattari and Debord on this point, see my earlier post.]

2. The Commodity as Spectacle
The commodity can only be understood in its undistorted essence when it becomes the universal category of society as a whole. Only in this context does the reification produced by commodity relations assume decisive importance both for the objective evolution of society and for the stance adopted by men towards it. Only then does the commodity become crucial for the subjugation of men’s consciousness to the forms in which this reification finds expression…As labor is progressively rationalized and mechanized man’s lack of will is reinforced by the way in which his activity becomes less and less active and more and more contemplative.
–Lukacs, History and Class Consciousness
35. The self-movement of the spectacle arrogates to itself everything that in human activity exists in a fluid state so as to possess it in a congealed form—being the negative expression of living value, it has become exclusively abstract value.
36. Commodity fetishism is the domination of society by perceptible and imperceptible images—the perceptible world is replaced by a set of images that is superior to the world yet impose themselves as eminently perceptible.
37. World of the commodity rules over all lived experiences.
38. Commodity form as self-equivalent and exclusively quantitative.
39. However, it is still subject to the qualitative—the spectacle must eventually break the bounds of its own abundance.
40. Development of the forces of production is the real unconscious history that has built and modified the conditions of the existence of human groups—human labor into labor-as-commodity after the ‘problem of survival is solved’—Economic growth liberates from the struggle of survival, but we must be liberated from the liberators. An abundance of commodity relations can be no more than an augmented survival.
41. Political economy as the dominant science and the science of domination.
42. Spectacle corresponds to the historical moment at which the commodity completes its colonization of social life. The whole of labor force as the total commodity must be returned in fragmentary form to a fragmentary individual completely cut off from the active forces of production. The science of domination is then broken down into sociology, applied psychology, cybernetics, and semiology which oversee the self-regulation of every phase of the process.
43. Perfected denial of man—worker transformed into consumer.
44. Spectacle is a permanent opium war—augmented survival itself belongs to the realm of dispossession: it may gild poverty, but it cannot transcend it.
45. Automation, capable of abolishing labor, must conserve labor as commodity—Thus new forms of employment must be created—the rise of the tertiary and service sector and the necessity for reintegrating newly redundant labor—the factitiousness of needs associated with the commodities on offer calls out a whole battery of reserve forces (for the production and satisfaction of the new pseudo-need).
46. Process of exchange became indistinguishable from utility, thereby placing use value at the mercy of exchange value.
47. Falling rate of use value—real consumer as consumer of illusion—commodity as illusion and spectacle as its most general form.
48. Use value, at once implicit, must become explicit due to the pseudo-justification that a counterfeit life requires.
49. Spectacle as another facet of money, the abstract equivalent of all commodities—the totality of the commodity world is visible in one piece, as the general equivalent of whatever society as a whole can do—spectacle is money for contemplation only—it is the pseudo-use of life.
50. Capital de-centers itself, spreading to the periphery, where is assumes the form of tangible objects—society in its length and breadth as capital’s faithful portrait.
51. Economy’s triumph as independent spells its own doom because it unleashes forces that must destroy economic necessity. It must replace the satisfaction of primary human needs with a ceaseless development of pseudo-needs—all of which merely point to the pseudo-need of an autonomous economy to continue.
52. Where economic id was, there ego shall be—product of the subject out of the struggle that society embodies.
53. Consciousness of desire and the desire for consciousness constitute the project whose goal is the abolition of classes and the direct possession by the worker of every part of his activity.

Continue to notes on section 3