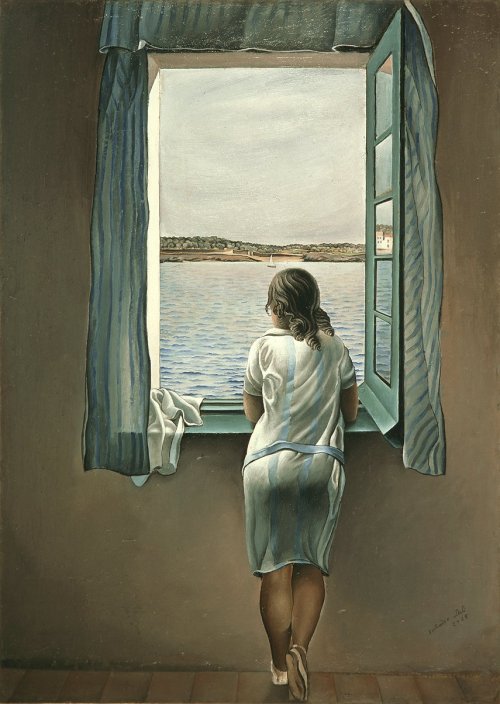 Woman at the Window Salvador Dalí, oil on board (1925)

What do we understand to be the boundaries of our neighbor: I mean that which he as it were engraves and impresses himself into and upon us? We understand nothing of him except the change in us of which he is cause — our knowledge of him is like the hollow space which has been shaped. (Friedrich Nietzsche, Daybreak 118)

Stripped of its social connotations, tolerance and democracy mean only a desire to say that the external is gone, what belongs (inside) is all; and there are plenty who say it, whether or not it is true! Our existence as social subjects is socially constructed; thus what once seemed outrageous now seems trivial and preliminary. Perhaps our age, though more complex in some ways, is ultimately not so different from Nietzsche’s: for what always matters more than metaphysics is how we actually measure and compare human beings; and now, being without Gods or absolutes to function as a universal scale, where are we to turn? “Actions are never what they appear to us to be!” (Daybreak 116) Still it is always the same story: we turn away, we cannot bear the intensity of the material, we desperately grasp outside, we look beyond for a vision capable of grasping all of being at once.

Metaphysics is done not from luxury but out of dire necessity: above all, we look away from the world, we repress space (culture-space, nature-space, psychic-space): this need for specificity-within-multiplicity is the name as such, the shape of all social oppression, the very cost of ‘civilization.’ Metaphysics traces lines beyond social forms into the formless, the chaotic and subversive turbulence beneath the turgid surface of politics, the violence beneath the ideal image, the flux between the forms. All language is a struggle between times; a struggle within time to overcome time. Language is temporality posed as a challenge; it is a creative space, positive in its empty smoothness, but eerily mute, insufficient in and of itself to initiate the vibrations of a new becoming.

Appearances replace things, literature overtakes myth; but this immateriality is always produced socially as cultural material, as material culture — as the opening onto new possibilities of becoming, new illusions but also new realities. Value in itself is the truly social illusion, all others repeat its primary act of distinction. Values are implicit, “subjective” in the sense that they distinguish individuals, capture the individual as a ‘moment’ of social evolution, force him into regions, territorialize his body. The body is valued as such, as an object, in one historical period; as a subject in another. Merely a linguistic, or a political change? Regardless, values are incessantly crumbling and being refashioned, all things flow. Sometimes the reterritorialization proceeds justly and sometimes hapharzardly, to be sure — but well-reckoned or not, the ‘arbitrary’ names and laws we give often stick, and become in the end even more important than the underlying things themselves. In short, we are always getting in the way of our perception of things, especially ourselves. This is the real reason why we are only able to catch sight of appearances: we ourselves are the obstacle we are trying to see around. Society is a machine which makes historical objects out of human beings; social critique describes new possible a-historical modes of becoming. The social impulse is a-social; that is, the essence of society is beyond the social. We can overcome social objectification, the same way we overcome metaphysical interposition: by overcoming ourselves. Transvaluation: don’t just seek to understand; seek to transform. Trust your senses, not your beliefs: chase becoming, not being. Turn towards the future.

Katie Micheson suggests Nietzsche advances “a dynamic understanding of an unconscious rather than merely a descriptive use of ‘unconscious,” on the basis of an active, custom-shaping force responsible for the historical development of guilt, forgetfulness, debt, pity and resentment. The unconscious for Nietzsche is creative, metaphysical, transformation, transvaluative: in short, “it’s concepts are not simply latent but are actively shaping the conscious actions and productions of the actor.” Micheson suggests that whereas Freud was concerned with uncovering repressed memories in order to re-normalize neurotic subjects, Nietzsche advocated not merely self-understanding, but self-transformation and overcoming. Freud tells us to understand our situation; Nietzsche tells us to face up to it, to overcome it, to transform it, to create new situations entirely. Psychoanalysis should not be about locking down desire inside a power structure; it should be about opening and unlocking power structures to enable desire and pleasure to employ their productive social power. Psychoanalysis is an art of counter-production; in its classical form it is exemplified by Lacan, where the subject is a gap in the transferential space, a ‘donut’ whose empty center transfixes the subject within a social space. Space is always segmented, regulated, already counted and measured: Lacan writes somewhere that society is elitist. He’s right, more or less, but the social question not about subjects, or subject-spaces. The social question is a question about subject-groups, who territorialize spaces in order to exert power and create mechanisms of control. The social question is, in short, a question about power.

The unconscious is the human organ which exerts and responds to pure power. The power of words, images, signs; the power of gestures, faces, crowds; the power of ideas, of hope, of the future: the unconscious resonantes with powerful signals, it responds to power, it forms and coordinates groups of subjects to become responsible to a signal. Thus the unconscious commands (by coordinating groups) and obeys (by responding to power); it hijacks consciousness and is hijacked by consciousness. It is a temporal rupture, it is the anti-foundational foundation of the Lacanian subject. The unconscious is a milieu, a mulitplicity, a self-organizing swarm of abstract machines. The unconscious plays with structure, this is almost a perfect definition: it aligns ontologies, transforms space, spontaneously introduces asymmetry. The unconscious is the signal signalling itself: who is listening, who is speaking? It no longer matters, it never did: the question (as always) is what to do, what to think, what to become. The unconscious is not ‘turned away’ from consciousness, from the world; it is what is turning awareness towards itself, towards the open. The unconscious is resistance to power, and the medium of social power itself. The formation of the subject group, with goals, aims, identity, from the chaotic milieu is the most generic resistance.

Subject-groups can be reactionary or revolutionary. The point is not to be included in the group, not to disappear into the group-structure, not to become locked into docile stable equilibrium. Become a point of rupture; become a million lacerated lines of flight. Do not renounce pleasure, do not abandon your power when it is required most! The pure act, the act done for its own sake, is the most unconscious and instinctual, hence the easiest and thus also the least ‘purposeful’ in the sense of metaphysical or social ends. This is the hidden material meaning of compassion, of culture: the pure act of the unconscious is produced socially, through machines which inscribe desires upon us, which inscribe us within a field of limits to producing new flows of desire. All instincts must be re-evaluated in light of the discovery of the unconscious, of an immaterial social field which coincides with our material critical capacity to resist being controlled and made into subjects.